Warm 25-year-old, Prince Harry took a day off from his pilot training program and displayed a good sense of humour as he appeared at a WellChild Children’s Health Awards ceremony in London on Monday September 28th, 2009. 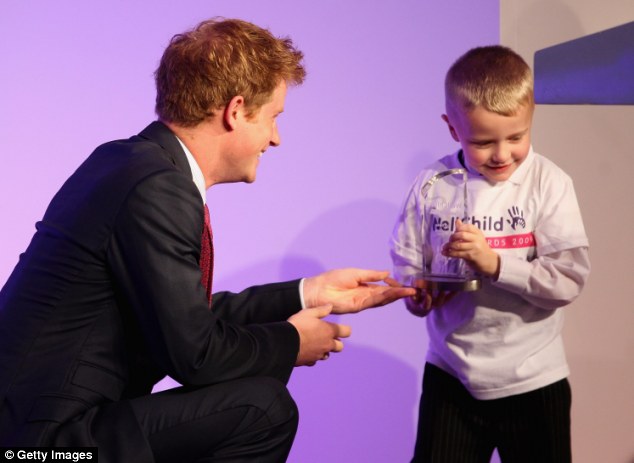 Alex Burke, 6, who has Neurofibromatosis Type 1, a genetic condition which causes non cancerous tumours to grow on nerves, leading to painful health problems, who received the Bravest Child accolade, When he comes to collect the award asked the prince: “Are you sure you are Prince Harry? Where’s your crown? So you’re not Prince William then?” Third in line to throne Harry took the banter in his stride and scooped Alex up in his arms and laughingly replied: “I’m sorry, you’ll have to put up with me!”

Alex then laughed and blew bubbles in Harry’s face.

Later Alex’s 26-year-old mom, Sarah, explained: “The only kind of princes that Alex knows about are the ones in stories who wear cloaks and crowns. I have been showing him pictures of Harry and his brother William, trying to explain who they are but he couldn’t understand why he wasn’t wearing his crown. I just told him that he wasn’t allowed to take it out with him.”

Lucy Tutton, 8-year-old, who was named the most caring child in the country, helps to care for her younger sister suffering from a severe neurological disorder, was so excited to meet Harry she screamed with joy. Lucy from Bristol gave Prince Harry a flower-shaped balloon. She said after their meeting: “Oh wow – I felt like a real princess.”

Prince Harry giggles when he was given the photograph by Harrison Holmes, eight, from Barrow-in-Furness, who suffers from chronic lung disease and met William earlier this year on a trip with WellChild to the Lake District.

The chatty youngster bowed as he handed his prized posession over to Harry and made him promise to give it to William. Harrison told him that William, who he calls his ‘Prince of Cuddles’, had promised to come to his house.

‘Oh, he is so sweet,’ said Harry, ‘I will definitely remind him of his promise.’